In a fox habitat area, you should have tools in your tent to protect yourself in case it bites through the tent. If it runs away, the fox may just reappear after some time. It may return when you are asleep and attack when you’re vulnerable.

You may have left some food items in your tent that are drawing the fox near. The fox could do so if it is just sick and attacks anything it comes across.

The fox usually eats birds, fish, animals, fruits and vegetables. Take precautions with respect to food items. Get some tools to defend yourself. Call for medical help immediately if attacked.

Can Foxes Bite Through Your Tent?

There are lots of things you can do to keep animals away. But our most vulnerable time is when we are sleeping in a tent. Only a tiny tent separates us from the outside. Foxes will bite through the tent or even claw their way in.

They are small and you can defend yourself and survive if they attack you. It’s very rare that foxes attack human beings.

They usually mind their own business. And flee when they come across a human. If you are attacked, that could be because it is protecting its kits or is sick or is just really hungry.

Do Foxes Attack Humans And Are They Dangerous?

Animals have a fight or flight response. It is a natural reaction to any form of threat. Foxes are actually fighting animals despite being opportunistic predators. They will flee in the face of adversity rather than to stand their ground and possess a natural fear of humans and will usually run away as soon as they detect human presence.

They are pretty harmless and are unlikely to attack a human for no reason. Foxes are only dangerous if they’re trapped, cornered, injured, or sick.

Do Foxes Attack and Eat Dogs?

Foxes do not eat dogs. They eat rabbits, mice, berries,roots, frogs etc as they are omnivores.  They do not go around killing for fun, only to survive. There is no reason to ever suspect a fox would hurt a dog.

Most of them play with other dogs or flee in fear of them. You do not have to worry about the fox hurting your dog or cat. If the dog is small enough or a small puppy, a hungry fox might take them.

On a few occasions in recent years where foxes have entered gardens and attacked small puppies. Foxes are even more afraid of humans than they are of dogs. Foxes get along well with dogs and cats and often learn their habits.

Will a fox attack me or my child?

Fox usually minor bites on people but that are extremely rare. They are not a threat to humans. Very rare history we can find in books. Fox does not attack the baby and makes no attempt to bite it. Foxes have injured babies and children in the UK but it is extremely rare.

Most foxes are about the size of a large domestic cat, they probably pose a potential threat to only the smallest breeds. It is thought that some of the reported attacks were carried out by younger foxes who are more curious.

Keep your children secure, fenced areas for their general safety. Discourage them from approaching wild animals. A wild fox in your neighborhood is not a threat. They do not need to be trapped or killed.

Do Foxes Attack At Night -Can They Hurt You at Night?

Foxes are smart thieves. People fear they might be violent and dangerous. Fox attacks on humans at night are very uncommon. They avoid fighting situations till encouraged. If you do not bother them, they will not bother you. Foxes are very shy creatures and avoid as much human contact as possible.

They hunt only small prey and naturally stay away from bigger predators, including humans. Foxes are actually omnivores.

They have a diet based on plants, fruits and other small animals like rodents, insects, birds, eggs, lizards and rabbits. Foxes cannot eat humans but they become dependent on food sources provided by humans.

Will a tent provide some protection from foxes?

Fox accidentally bumps into a tent. When you see them, they will be shocked and frightened like you. They will be gone before you have a chance to scream. They know their prey very well and foxes don’t see human beings as worthy.

The problem of sleeping without a tent is the same as with a tent. A tent might give some protection for your food and stuff as they are not going to attack you. A tent can not give strong protection like houses.

Once a fox loses its interest in your tent, they are gone. Foxes and most critters, will be more interested in any food you may have with you.

What Should You Do If a Bear Attacks Your Tent?

You must be prepared to defend yourself. The two types of bears you will encounter are Black bears or Brown bears. Brown bears are more aggressive and go on the defense. They prefer not to interact with humans because of their solitary nature. Black bears are more tolerant of human presence.

They run away when threatened. Black bears are excellent climbers and often seek safety up a tree. If a bear attacks your tent while you are inside, try to peacefully flee. Do not turn your back on a bear. Slowly move away from it while keeping it in your line of sight.

Make distance between the bear and you as possible. For a Grizzly Bear, play dead. Black bears do not respond well to humans playing dead. Try to scare them off and physically defend yourself.

Bring bear spray with you if you are venturing into bear country. A heavy or large object within your tent can be a weapon to dissuade a Black bear.

How Do You Bear Proof A Tent?

Set up your campsite so that your cooking area and tent are at least 200 feet apart. Secure your food and other smelly items. Bear hangs are a popular option among lightweight backpackers. Before you go to bed, change into your sleeping clothes and put the ones you ate away.

Pack bags that are odor proof for your leftover food and your trash. Check the area for signs of recent bear activity. The tent should also be placed a fair distance from your food disposal area. Keep your site clean by packing away all your trash and food. Keep bear spray in your tent with you. Bears don’t see well, especially at night.

As long as there’s no food odor, they’ll leave things alone. What works for bears works for ground squirrels, mice, and other critters. Like bears, these small animals learn where, and in which containers, campers store their food.

What should you do if a fox enters your tent?

It depends on the position. If you are in a tent, just stay there and don’t move. But if you are sleeping in the open, just stay in your sleeping bag. A fox will usually just sniff around.

They will look for food. Wolves do not attack humans. Give them some food that might help them to leave the place. The fear of people is greater than the desire for food and they will stay away.

If you annoy them enough, they will take action. If you are perceived as a threat they will attack. They do not back down easily. Use your own judgment. They can track you just like you can track them. Always respect your surroundings. Think hard about where you go.

Justin is a freelance writer specializing in adventure, camping, hiking, home improvement, pet and technology. He is an avid animal lover since he was a little boy. He lives with his wife Malina, son Oliver, and their purrfect angel cat, Fifi.

travolover.com is a participant in the Amazon Services LLC Associates Program, an affiliate advertising program designed to provide a means for sites to earn advertising fees by advertising and linking to Amazon.com. 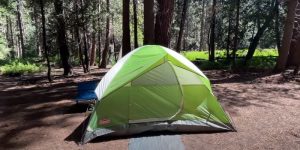 How Can I Be Eco-friendly While Camping (17 Great Tips)

How To Insulate Tent For Winter & Summer Camping

Why Do Many Americans Enjoy Camping?

Why Camping Is Good for Kids [12 Reasons]

Can You Sleep in a Tent When It’s Raining?

How to Beat the Heat When Camping?

How to Get Electricity while Camping